The Shirley Grimstone Memorial Ride was well represented by the Mornington Peninsula Hermits. Three groups of Hermits made their way to Bermagui/Mallacoota for the ride. One group consisting of Steve, Rowan and Dave left the Peninsula on Thursday and rode directly to Bermagui while another group made up of Angelo, Sam and Manny also left on Thursday and rode to Mallacoota and then on to Bermagui. Angelo, Mel, Doug, Anne-Maree, Dennis, Lynn, Marcus and Berni left on the Friday, stayed overnight in Lakes Entrance, and rode on to Mallacoota on the Saturday. Although it was raining when we started out, the weather turned out to be be quite warm later on in the day. The ride went well other than a slight fuel line problem with Mel's car. Thanks to Dennis, Lynn and Doug for sorting out the issue. We checked into the motel in Lakes and dined on some delicious KFC, pizza and donuts. A spot of fishing was enjoyed by Rowan, Steve and Dave on Friday in Bermagui and although there was a three metre swell, some good fish were landed thanks to Steve who provided the berley, and the whale watching was provided free of charge.

Thirty seven bikes left Bermagui for the ride to Mallacoota while another four bikes made their way up to join the group in Genoa. It was quite an impressive sight to see all the bikes roll into town. We all checked in to the pub and proceeded to enjoy some cleansing ales on the lawn followed by a scrumptious dinner in the bistro and then we were entertained by some "tongue in cheek" Greek music provided by the Goats of Mykonos. We all made our way home on the Sunday.

Thanks to the Kingies for making us feel welcome. Thanks to Jim, Jane and Franco for putting up some of our crew and thanks to the Mallacoota Hotel for their hospitality and for not calling the police when the nudity started. And thanks to the nice lady on the pedestrian crossing in Traralgon for teaching Doug and Anne-Maree some new swear words.

Steve had a business appointment in Albury so he and Angelo left on the Thursday, stayed overnight in Glenrowan, and then made their way to Lakes Entrance via the Great Alpine Rd. The unusually cold conditions had the intrepid duo doing a bit of riding through some snowy patches but other than feeling a bit chilly all went well. Ross, Berni and Marcus met at Tooradin on Friday arvo and after a brief stop were on their way. Lunch was at the sumptuous Hungry Jacks store in Traralagon where a few drops of rain began to fall. The skies were grey and dark and we feared the worst but amazingly the weather brightened up over lunch and these few drops were the only ones for the entire ride. Steve and Angelo were the first to arrive at the Esplanade Motel in Lakes Entrance shortly followed by the others. When Steve enquired if the other group had checked in he was told ..  "you are the first couple to arrive". Couple??? He was probably confused with all the leather and Steve's striking resemblance to the biker dude from the Village People. We all checked in and then met at the bar for a couple of cleansing ales prior to dinner. Marcus and Berni did a quick reccy to the Lakes Entrance Bowls Club as this had been recommended, but it was decided to meet at the RSL as it was only a short walk from our accommodation. Now, there is nothing like a ride to make a fellow lust after a good mixed grill and we felt sure that the RSL would have one on the go....but sadly no. Marcus did spy a waitress carrying something that looked remarkably like a mixed grill but it turned out to be the beef schnitzel, bacon, egg and chips. This is now known affectionately as a "Frill" as in "A Fake Mixed Grill". But it was still a grouse meal. We can highly recommend the Lakes RSL, all the meals were great. After enjoying a good nights sleep and the Esplanade Motel's complimentary light breakfast we were on our way to the meet up in Cann River. The weather was dry and the traffic was light so it wasn't long before we made the obligatory coffee and bakery stop in Orbost. We arrived in Cann River only to be greeted by the worlds most obnoxious cop. He literally yelled at us for parking in a no standing area and told us that we had two minutes to move or we would all be booked. We later found out from the locals that this particular cop is known to have some serious "behavioural" issues and is even shunned by other members of the police force.  Lunch was at the Cann River Hotel and after a quick bite we headed off to Mallacoota. There were about 30 bikes in total. Once at the Hotel we settled in for drinks on the lawn in the warm sun followed by a great dinner. There was much mirth and mayhem to follow but unfortunately the Hermits "nudie swim representative" failed to show this year however we took a vote and decided to appoint Lyn again for next year. So Lyn, there's no need to pack your bathers in 2014 !!. After dinner, Steve and another fellow entertained the crowd with some good ol' home grown music (see, Steve really is the bloke from the Village People).  The pub was kind enough to open the bistro again for us on Sunday morning for breakfast and a hearty breaky was had by all. We said our goodbyes and headed back to the peninsula but not before we had the usual...Custard tart in Cann River, Bee hive an Bruthen and Strawberry tart in Stratford. The Memorial Ride was a great success yet again. Thanks to Angelo who supplied an Air Pro on-bike video camera for the ride. Watch this space for an exciting short vid on the ride. Thanks to the Kingies for their hospitality, the riders who made it all happen, the Esplanade Motel in Lakes and the Mallacoota Hotel for putting up with us. A great time was had by all.

Meet up in Genoa. 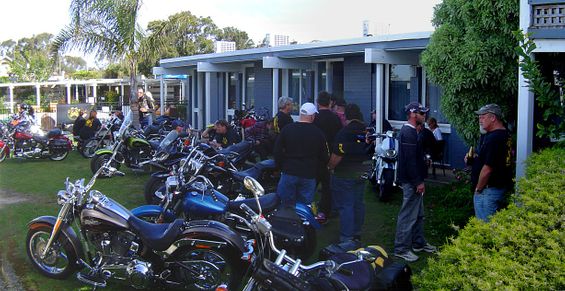 The bikes at the Mallacoota Hotel. 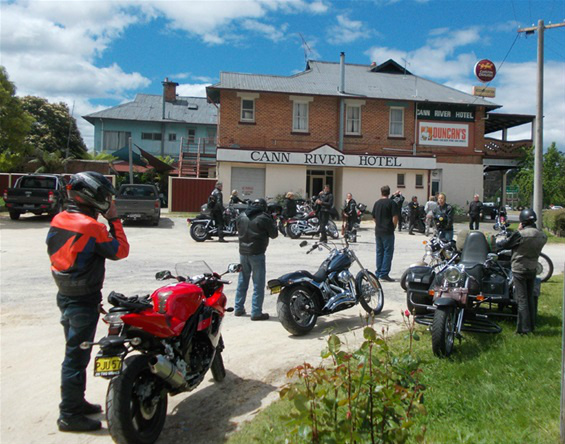 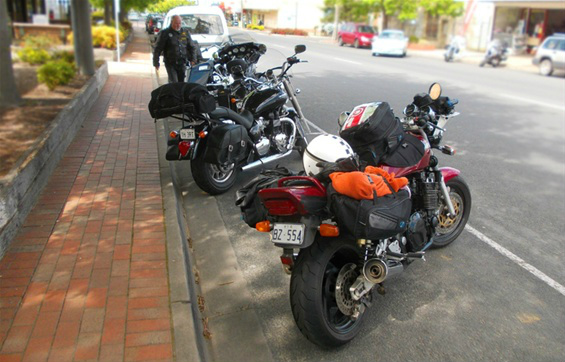 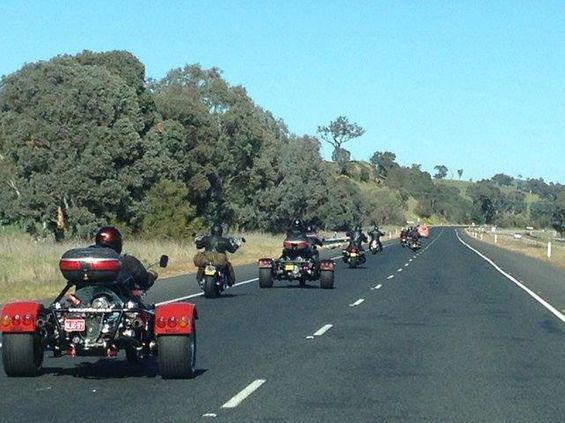 Rowan (Hoobs), Hughy Von Luie & Simon The Likeable met Steve at his place on Friday morning. They picked up Tone the Bone (otherwise known as Orville) on Peninsula Link at Cranbourne Road. We picked up Angelo (The Godfather) at Campbelfield then moved on and picked up Jimmy (the chick magnet & CRAB YABBY) at Wallan. So the stage was set. Seven of the biggest wankers on earth ready to tare up the bitumen and generally cause mayhem. OK, so I exaggerated a bit. Jimmy took over as Ride Capitano and we set off for Finley via the scenic route. Through Broadford, Flowerdale and stopping for lunch at Yea. Of again via Mansfield and Tolmie to Whitfield, Wangaratta, Yarrawonga, Tocumwal and into Finley around 6.30 and straight to Tractors (YABBY's President). Orville Jimmy & I checked in at Tractors place, Simon checked in to the local Motel and Hoobs and Von Luie checked in at the Caravan Park. Tractor lent non drinker Orville a spare car and so (Orville the weekend Cabbie) was born. We had a nice nite at Bubs (local yocal and foundation YABBY's backyard bar. Several of the local lads welcomed us and a great night was had by all. Thank again to Orville the Cabbie. On Saturday we caught up with the Hermits newest member, Derek Hummer, who had joined us for the weekend festivities. The Hermits and the YABBY's took off to meet the Kingies for lunch at the Oaklands pub. All of the bikes made an impressive sight lined up in front of the pub. We enjoyed a nice lunch and refreshments and the bulltish flowed freely. We all rode back to Finley where we convened at the Show Grounds where the Bulltish continued. Everyone disbursed to their accommodation, be it tents at the show grounds, motel or YABBY's billeting. On Saturday night we partied hard and danced to a great band that Tractor had organised. The venue was great as we were in the Lions Club, Club Rooms. This ride doubled as this years Shirley Grimstone Run and the YABBY's initiation. A few speeches and an abundance of refreshments and a great time was had by all. It was nice to catch up with our fellow CRABS and swap a few lies. Derek proved a welcome new Club member. He has some ideas regarding hosting a Golf Day at his local golf club with proceeds going to the club to be included in our Cancer Research Donations. (Well done Derek and welcome aboard) On Sunday morning we kissed each other goodbye, (not in a gay way). Angelo & Derek had prior engagements so they left early. Jimmy stayed on to nurse his hangover at Tractors place. Hoobs, Von Luie, Simple Simon and I stopped for a quick breakfast just passed Tocumwal then the freeway all the way home.  A great weekend enjoyed by all. Congratulations to Tractor and his able team of YABBY's. We look forward to catching up with them all soon.