Marcus, Berni and Steve D. met at Steve Bells home and soon left for the Langwarrin Hotel to meet Dave, Sylvia, Brendan, Rowan, Shelley, Tony, Billy, Marisa and Oliver. We arrived early at Cranboune and had a coffee and sausage and watched the other bikes arrive. Soon about 300 bikes had gathered in the car park. The Lions Club had a free raffle and amazingly two of our members won a prize..Steve D won a shirt and Billy won a Harley Tshirt. We left for Calder Park Raceway under police escort the whole way. The police blocked off all the entrance ramps on the Monash and they did some rolling road blocks through the Domain Tunnel so we had an uninterrupted run all the way. I asked if they wouldn't mind doing the same thing in the morning for my drive to town and they said they would get back to me...I haven't heard any news yet. After riding through a couple of brief showers we arrived at Calder Park in bright sunshine. Other groups of riders were arriving as well and soon there were thousands of bikes there. We delivered our gifts to the Salvos and set about having a snack, watching the stunt riders show, listening to the live music and doing a bit of shopping at the expo. A good day was had by all and it was great to participate in such a worthy cause. 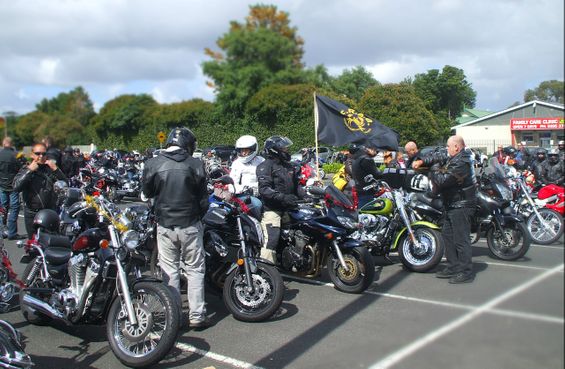 It was a bright and early start on Saturday when Marcus and Berni arrived at the Coffee Club in Frankston. Stig soon joined them and after a quick coffee we set off to the pier carpark. There were plenty of bikes there already with many more constantly arriving. It wasn't long before we found everyone and we formed our own group, consisting of Ross, Vicky, Stig, Merv, Rowan, Steve, Marcus and Berni, in the carpark. Some of the riders actually contemplated getting a coffee but renegged when they discovered the coffee queue stretched back to Carrum. Only Vicky was brave enough to endure the line-up. We feel she may have a serious caffeine addiction to attempt such an arduous feat.  After the welcome speeches and riders briefing, we saddled up and departed. 430 bikes left Frankston and travelled down the highway and then down Main St. Mornington, where we re-grouped. We then headed down the coast to McCrae where we had another stop and then on to the Rosebud Secondary College. There was a fantastic spread of food waiting for us thanks to Food For All, the local CWA and several of the Peninsula Ulysses Clubs. One member mentioned that it had all of the basic three food groups - pies, sandwiches and cakes - what more do you need for the bikers healthy eating pyramid.  We delivered our donated gifts, tucked into the lunch and bought some raffle tickets. Stig was lucky enough to win

a helmet. It was great day all round. The CRABs had a good ride, we did some marketing for the club and over 1500 gifts were donated by the riders. A great result. 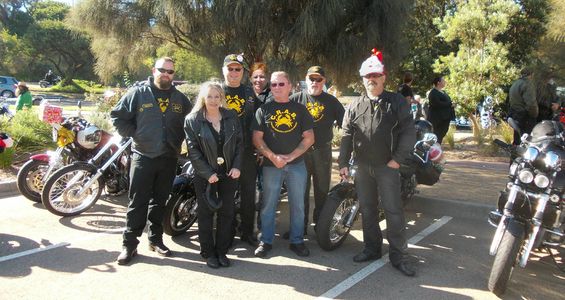 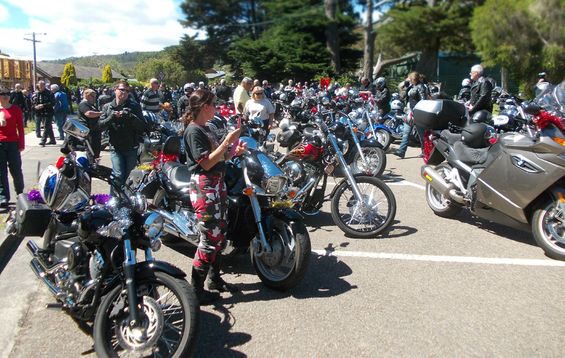 We all awoke to a lovely moist December morning in keen anticipation of delivering our toys to the needy. Simon, Caleb, Marcus, Berni, Chad & Ross all arrived at Frankston pier but there was no Pres as it was chucking it down in Somerville. Gee, even Santa gets on his sleigh in the North Pole when it’s snowing. Marcus was happy however as he reckoned that would leave more for him to eat when we get to Rosebud and the enormous spread they put on each year. We took off in the rain with Berni following up in the (dry) car and trailer. At the stop in Mornington we met up with Barry and Chad's bike decided to call it quits for the day by depositing its cooling fluid onto the road. So Ross being the good dad he is pushed it home whilst Caleb and Marcus waited. At Rosebud we all hooked up again and got stuck into the tucker and mingled with the crowd and did our best to help out the good ladies serving the pies & sausage rolls. We listened to all the speeches and the good news is it was announced the volunteers for the event will be having their pay doubled next year!!. Unfortunately this year no CRAB had their raffle ticket drawn out. Oh, also Marcus's purple hands courtesy of his wet gloves freaked a few people out but didn't deter his participation in the offerings. As you might have surmised the day didn't go exactly as planned but a still a great outing for a great cause. I hope Santa is kind to all. 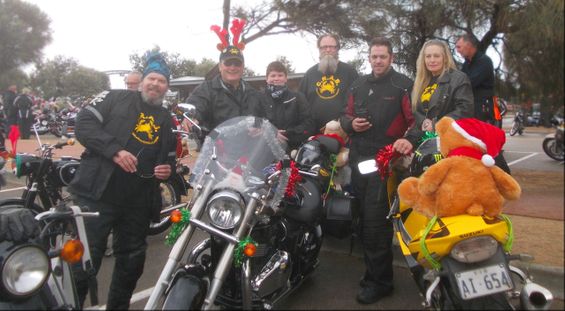 The happy toy run crew about to wet. Such dedication ! 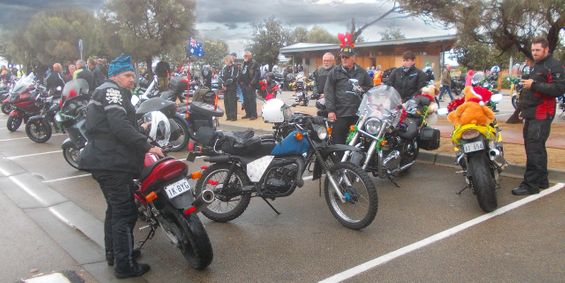 At the pier waiting for the start.

Unlike the previous year, the weather was bright and sunny when the CRAB crew met at Frankston Pier. It seems that the warm weather brings out the best in bikers and hundreds turned up for the run. Once again “truck loads” of great gifts were donated and, of course, we were all rewarded with some great food. Roll on the 2016 Toy Run. 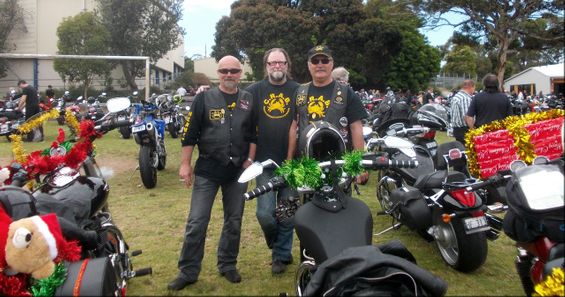 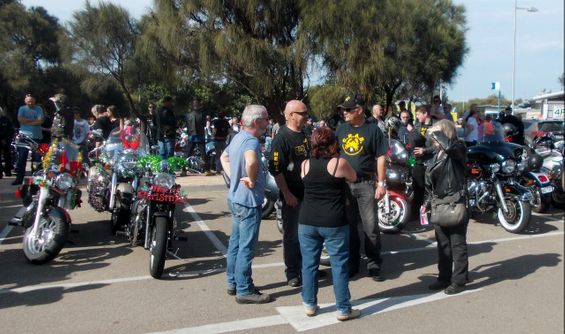 Once again hundres of bikers turned up at Frankston Pier to support the annual Toy Run. Many hundreds of gifts were donated the the less fortunate children on the Peninsula. Many thanks to the riders, the ride organisers and the ladies who prepared all that delicious food. 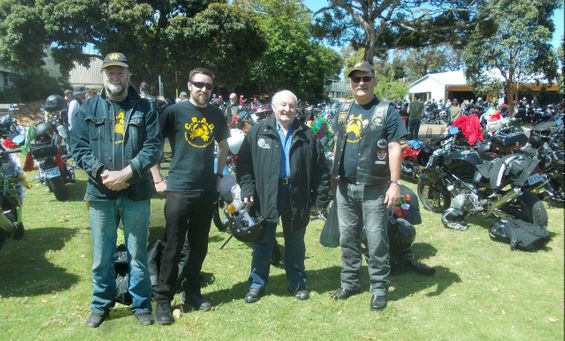 Some of the CRAB crew at Rosebud. 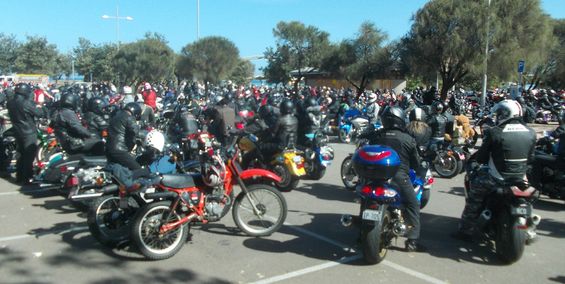 The throng at Frankston Pier.