By the time we had packed the bike, instructed the neighbour on the finer points of duck husbandry and said goobye to the cats it was 11.30 before we got away. The day was fine and sunny and we made our way through Drouin to the Princess Hwy. Our plan was to make it to Orbost for the evening and after a quick lunch in Traralgon we were on our way and on schedule. We made it through to Orbost via Bruthen and checked into our motel. Fortunately we planned an early dinner, as we later found that all of Orbost closes at about 8pm. The next day we saddled up and headed for breakfast in Cann River. The weather was almost perfect for riding and we made it to Cobargo easily for lunch and then on to Bermagui. Dinner that night was at Jim and Janes home where we met up with Steve, Rowan, Angelo and Tony who had ridden up from the Peninsula that day. The BBQ and a few ales on deck went down very well. Thanks to Jim and Jane for their hospitality. The next day we met for breakfast in Bermagui and then on to the bike show. The Kingies had done a fantastic job in bringing it all together and the show was excellent. Later on that day the Hermits went for a ride to Tilba Tilba and then on to Central Tilba for some sight seeing. It certainly is a beautiful part of Australia. It was back to Jim and Janes for a few post show drinks and then off to the Bermagui pub for dinner. The "mega mixed grill" went down a treat. Sunday arrived and we prepared for the ride home. Steve, Rowan, Tony and Angelo were planning to do the trip in a day while Berni and myself decided to ride down the Snowy Mountains Hwy and then on to the Monaro Hwy through Bombala and on to Cann River and make it a two day ride home. After an absolutely fantastic ride across the roof top of Australia we made it to Lakes Entrance by mid afternoon. It was quite hot when we arrived so it was out of the riding gear, quick shower, into some shorts and thongs and then a pleasant stroll along the foreshore to Safeway to pick up some supplies and some bevs and as luck would have it our motel in Lakes was only a few doors from KFC..how about that! The next day we picked up a few brief showers around Bairnsdale but after the perfect weather we had had prevoiusly we couldn't complain. By the time we had passed Sale the weather was warm and sunny again. A quick lunch at the Lang Lang pub and then on to home where we were chastised by the cats and ducks for having the audacity to leave them. A great ride, a great show and great company....when's our next ride? 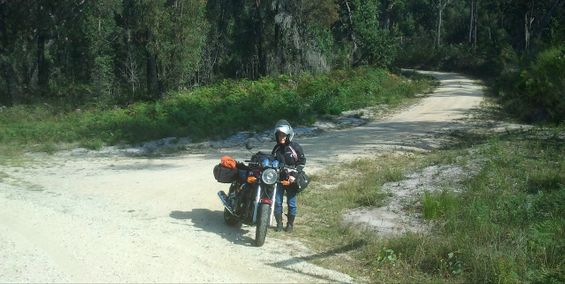 Rest stop near the NSW borber. 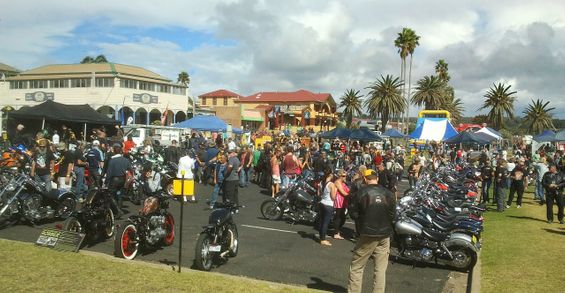 At the Bermagui Bike Show. 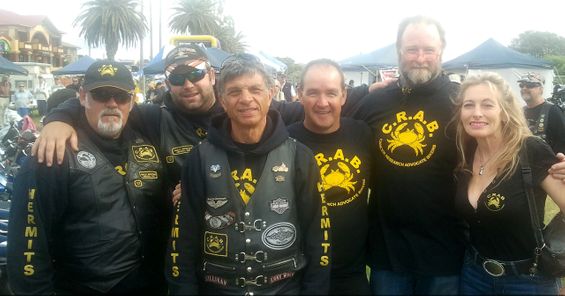 The guys and gal enjoying the bike show.

Steve Ross & Angelo set of North from Melbourne on the Thursday afternoon expecting but not enduring any rainfall. The Hume highway was a pretty boring ride but we broke it up by meeting with Rowan in Euroa on his way home & also checked out the statues of the three VC’s from this town. We arrived in Wangaratta just in time to check into the caravan park & order dinner from the pub before the meals went off. They then kicked us out at 9.00 pm closing time!! On Friday morning we met up with Jimmy, Steve, Chris & Tractor at Jimmy’s place & plotted out a route across the mountains with some trepidation as snow was forecast above 1400m. We set off and had breaky at Beechworth Bakery where there were quite a few bikes around due to the Ulysses ride in Albury. After fuelling up at Khancoban  we started to climb into the higher regions. Ross discovered that heated grips rule! we then crossed the divide at over 1600m & whilst it was cool we were in the clear with no cloud cover so the timing was good as we meandered down to Thredbo for lunch at the pub.  From there the roads opened up down through the pretty town of Jindabyne and onto Cooma & before we know it we are heading down Browns Mountain towards the beautiful Bega valley. Then into Bermagui, arriving at the front of the pub which was full of Blueys around 5.30 pm. A nice meal followed at the local Chinese restaurant

Saturday dawned as a magnificent morning  on the Sapphire Coast. Ideal day for a bike show. For Steve, Angelo, Tractor & Ross the day was broken up by a ride out to Tilba for lunch at the pub (Don’t mention the steak to Tractor!) whilst Jimmy, Steve & Chris headed up to Batemans Bay. The band was in full swing, the judges made the hard decisions on the bikes (Tractor was robbed of a prize) & numerous other fundraising activities were happening. The boat raffle was drawn and all up around $20k was presented to Cancer Research. After a successful day and packing up everyone headed to the Pub for  a fine feed & big night out.

Sunday arrived with somewhat bleary eyes. After a lazy morning of bacon & eggs on Jim & Jane's balcony there was a bit of a working bee cutting back some trees that had grown which was spoiling the view of the dam. A ride was organised to Narooma for lunch at the pub with million dollar views overlooking the inlet & was enjoyed by  Ross, Tractor, Angelo, Jim & Steve who had Jane on the back. A quite night was had in preparation for the big ride home on Monday

Monday morning at 8.00 am Steve, Angelo, Tractor & Ross bid farewell to Jim & Jane & thanked them for their kind hospitality. The roos between Bermagui & Tathra had been cleared the night before so we had a nice beginning for the trip South. We stopped frequently for either fuel, coffee, a pee or a stretch before lunching at Bruthen and saying farewell to Tractor who headed home via Mt Hotham.  The remaining  three headed back towards the big smoke with Steve & Ross arriving home around 5 pm after a round trip of 1650k